How Vision Loss Can Affect the Brain 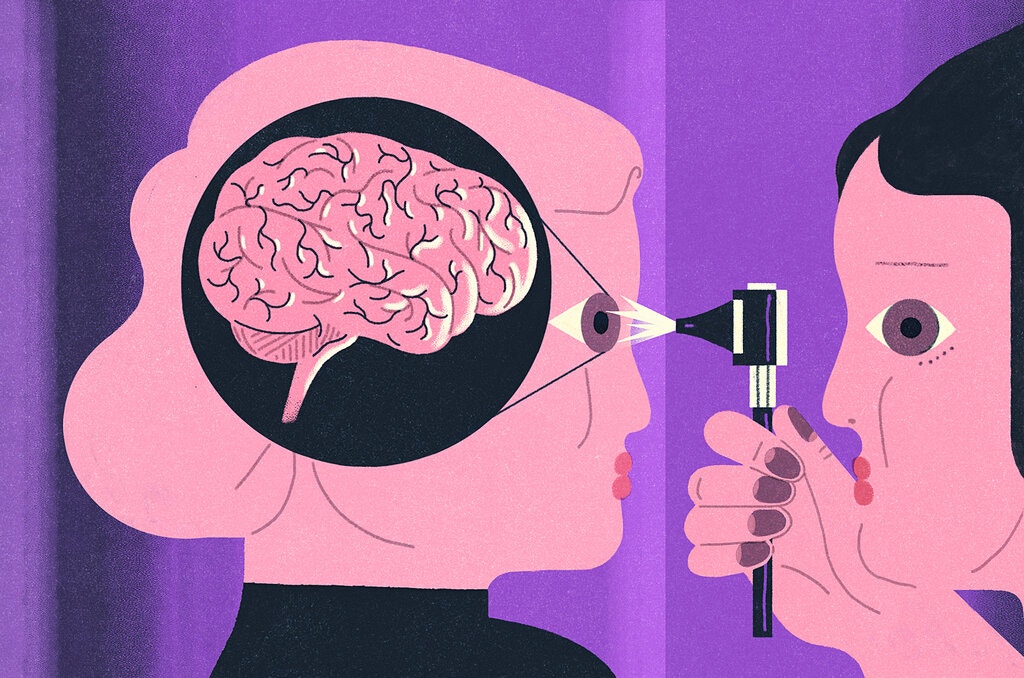 A growing body of evidence suggests that when older people’s brains have to work harder to see, declines in language, memory, attention and more could follow.

Medical practice tends to divide its clients — you and me — into specialties defined by body parts: ophthalmology, neurology, gastroenterology, psychiatry and the like. But in fact, the human body doesn’t function in silos. Rather, it works as an integrated whole, and what goes awry in one part of the body can affect several others.

I’ve written about the potential harm of hearing loss to brain health, as well as to the health of our bones, hearts and emotional well-being.

Untreated hearing loss can increase the risk of dementia. Even those with slightly less than perfect hearing can have measurable cognitive deficits.

Now, a growing body of research is demonstrating that vision loss can affect the brain’s function, too. As with hearing, if the brain has to work extra hard to make sense of what our eyes see, it can take a toll on cognitive function.

The latest study, published in JAMA Network Open in July, followed 1,202 men and women aged 60 to 94 for an average of nearly seven years. All were part of the Baltimore Longitudinal Study of Aging, and had vision and cognition tests every one to four years between 2003 and 2019.

The researchers found that those who scored poorly on initial tests of visual acuity — how well, for example, they could see the letters on an eye chart from a given distance — were more likely to have cognitive decline over time, including deficits in language, memory, attention and the ability to identify and locate objects in space.

Other vision issues, like with depth perception and the ability to see contrasts, also had deleterious effects on cognitive ability.

The lead researcher, Bonnielin Swenor, an epidemiologist at the Johns Hopkins Wilmer Eye Institute, said that the new study “adds to mounting longitudinal data showing that vision impairment can lead to cognitive decline in older adults.”

Correcting poor vision is good for the brain.
Lest you think that the relationship is reversed — that cognitive decline impairs vision — another study that Dr. Swenor participated in showed that when both functions were considered, vision impairment was two times more likely to affect cognitive decline than the other way around. This study, published in 2018 in JAMA Ophthalmology and led by Diane Zheng from the University of Miami Miller School of Medicine, included 2,520 community-dwelling adults ages 65 to 84, whose vision and cognitive function were periodically tested. She and her co-authors concluded that maintaining good vision as one ages may be an effective way to minimize the decline in cognitive function in older adults.

“When people have vision loss, they change the way they live their lives. They decrease their physical activity and they decrease their social activity, both of which are so important for maintaining a healthy brain,” Dr. Swenor said. “It puts them on a fast tack to cognitive decline.”

But identifying and correcting vision loss early on can help, Dr. Zheng said. She suggested regular eye checkups — at least once every two years, and more often if you have diabetes, glaucoma or other conditions that may damage vision. “Make sure you can see well through your glasses,” she urged.

When glasses alone aren’t enough
There are “vision impairments that glasses won’t fix,” Dr. Swenor said, like age-related macular degeneration and glaucoma. Retinal disease began to compromise Dr. Swenor’s vision in her mid-20s. Those with problems like hers can benefit from something called low vision rehabilitation, a sort of physical therapy for the eyes that helps visually impaired people adapt to common situations and help them function better in society.

Dr. Swenor, for instance, can see objects in a high-contrast situation, like a black cat against a white fence, but has trouble seeing the difference between similar colors. She can’t pour white milk into a white mug without spilling it, for example. Her solution: Use a dark-colored mug. Finding such accommodations is an ongoing task, but it enables her to continue to function well professionally and socially.

Society, too, needs to help people with visual impairment function safely outside the home. Most things in hospitals are white, for example, which creates safety hazards for people with diminished contrast sensitivity. As a driver of 50 years, I’ve noticed that road barriers that used to be the same color as the road surface are now more often rendered in high contrast colors like orange or yellow, which undoubtedly reduces crashes even for people who can see perfectly.

Home improvements may foster brain health
People who have trouble with depth perception can also incorporate helpful design features into the home. Placing colored strips on stair risers, varying textures of furniture and color-coding objects can all improve the ability to navigate safely. People who can no longer read books may also listen to audiobooks, podcasts or music instead, Dr. Swenor said.

The link between visual impairment and cognitive impairment “is not a doomsday message,” she added. “There are many ways to foster brain health for people with vision loss.”

Step one may be getting a Medicare extension bill through congress, which in turn might prompt private insurers to also cover vision care and rehabilitation. The Democrats’ current proposal to extend Medicare benefits to cover vision care would more than pay for itself in the long run by diminishing already-covered medical costs for cognitive and physical decline.

Case in point: The cost of a single hip replacement resulting from a vision-impaired fall would exceed the cost of many hundreds of eye exams and needed vision corrections.

Jane Brody is the Personal Health columnist, a position she has held since 1976. She has written more than a dozen books including the best sellers “Jane Brody’s Nutrition Book” and “Jane Brody’s Good Food Book.”